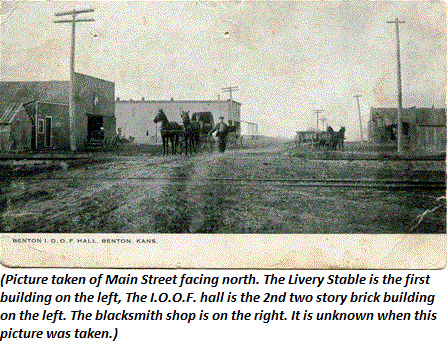 Welcome to the City of Benton! We are defined less by boundaries on a map than by the sense of shared values our residents hold dear. We take pride in maintaining a wholesome lifestyle, rich in cultural history, along with a deep commitment to the preservation of our environment and a progressive approach to local business.

Some of the following information was written by Mrs. Ralph (Lucille) Winegarner.

In 1855 the first territorial legislature designated Butler County as one of the original 33 counties of the State.  It was named in honor of Andrew P. Butler, a Senator from North Carolina.  William Hildebrande was its first settler in 1857 near El Dorado.  By 1859, 50 families had settled in the north central area and the County government was formally organized.

The City of Benton is located in Butler County's Benton Township, which was named after Thomas Benton Murdock. The first settlers arrived in the Benton area about 1870. In 1872 the Township was organized and had an assessed valuation of $20,296.00. The Missouri Pacific Railroad laid its rails through the area in 1883, and the town was platted that same year.

A grade school was organized on July 22, 1871 and was located 1/2 mile south and 1 1/2 miles west of the present town of Benton. In this school house the Methodist Episcopal Church was organized in late 1872 or 1873. In 1885 a new Methodist church was built on the northeast corner of Henrie and Wichita and served the people of Benton until it burned down in 1929. In 1931 a new building was built and served as the Methodist Church until 2007 when the New building was built at Main and Hwy 254. The old Methodist Church building was sold and is currently still used as a Church.

In 1883, the Benton School was moved into the Landon Building on the west side of Main Street.  In the two years, a new frame building was erected on the present site of the grade school grounds and in 1885 the first classes were held in the new building.  A joint Benton High School and Grade School was built in 1911.  A gymnasium and additional classrooms were added in 1922.  This facility was used until a new grade school building and auditorium were erected in 1954.  Benton schools consolidated into the Unified District #375 in 1961 leaving only eight grades at Benton with all high school located in Towanda.  The Benton High School was torn down in 1964 as a result of school district consolidation and more grade school classrooms were added.  The playground at the Grade School was completed as a part of the 1976 National Bicentennial activities.

The Benton Christian Church was organized in 1875 in a little school house so small it was known as the "pill box". This school was located on the J.L. Glancey farm northeast of Benton. Later the Enterprise School was built on the same farm and the church held their meetings there until 1884 when they dedicated a new church on the present site.

Sometime before 1900 the Presbyterian Church was built in the 200 block of south Wichita street. Approximately 1924 it was moved to a farm south of Benton and made into a barn.

In 1883 or 1884 Benton School was moved into the Langdon Building on the west side of Main Street. In two years a new frame building was erected on the present site of the grade school grounds and in 1885 school was held in the new building.

The joint Benton High School and Grade School was built in 1911. A gymnasium and classrooms were added in 1922. The new grade school building and auditorium were erected in 1954. The High School building was torn down in 1964 and more grade school classrooms were added. Benton schools consolidated into the Unified District #375 in 1961 leaving only eight grades at Benton with all High School students attending Circle High in Towanda.